I’ve been busy travelling and sunbathing in eastern Europe, but I still managed to paint some minatures. Here is a quick view of what’s going on:

The Guardians of Univerce’s Order are getting more colours. I’ve decided to speed up my work, because if I’m ever to play Age of Sigmar for more than hudnread points then I’ll need more painted lizards – and to say the truth I’m not a fan of doing meticoulous work on dozens of figures of one type. Anyways:

Lizards have two rigth arms. Yes. I couldn’t decide which weapon will be more effective, so i glued some magnets inside torsos and arms to let me decide on that matter whenever I wish. How to do that is a topic for another note, so back to painting:

What’s changed in my method? After basing them with Citadel Stegaddon Scale, I drybrushed them with different “base” colours. For now the effect is not bright enough, but I used it just as a primary colour idea. What’s more This Guy in the middle… 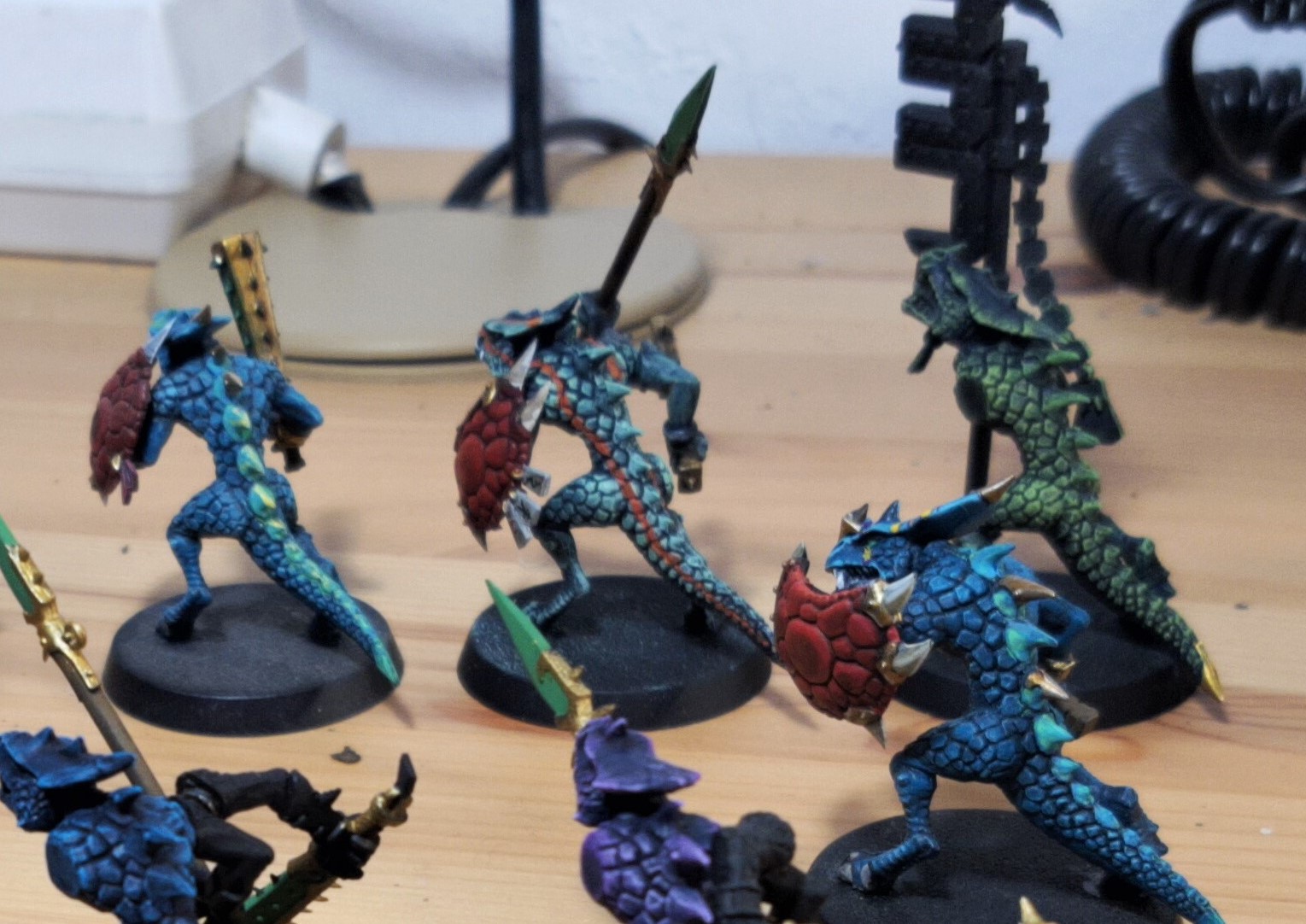 … is drybrushed with mix of blue and white. It makes his scales pop and that’s the effect I’m trying to achieve. You can see the difference in brightness between the “old” (clasically painted) and “new” (drybrushed) scales:

These two are gaining more colorus, but I’m still pretty undecided about the end result. They’re going to take me much more time… or I simply need a breath of saurian inspiration…

I don’t know much about this army – those are my friend’s minatures. Thanks to him, I can paint them (or to be more precise – finish them)! It’s a nice change from scales and mechanical bodies.

T’au is a modern, highly developed space empire, using hi-tech weaponry and suits in battle. Highly efficient in ballistics and range weapons, they happen to be less deadly in close combat.

The main idea for these guys is camouflage. Basic colour is Citadel Paint Castellan Green, brighter smudges are a mix of Citadel Nurgling Green and Vallejo Intermediate Green. They’ve been painted with drybrush, because it’s easy and quick. Applied in a certain manner, drybrush gives this nice weared and “leaflike” look and creates nice highlighted edges.

These are Battlesuits, and inside each one is a T’au warrior:

Of course there is simple infantry available:

There would be no T’au without their AI Drones. It’s worth keeping them close to infantry, because they can take infantry’s wounds.

On the side note – my heart will always be by Omnissiah and the priesthood of Mars, so the type of computers T’au has are just an abominable inteligence and a blasphemy to the true spirit of Omnissiah! And speaking of Omnissiah…

Here is a brave, meticoulous, curious and canny (pun intended) Xenoarcheologist of Mars. Im’ not sure though if in lore this character is really from Mars or not, but nontheless I decided i LOVE Mars’ colour scheme, so there it is…

Xenoarcheologist is a (of course) archeologist searching for xeno (alien) artefacts, that (in theory) will help to develop Humanity and ensure the Everlasting Glory of the Empire of Man. Of course if you look into the abyss long enough, the abyss may stare back at you… or try to talk to/devour you, so it’s best to shoot first and then NOT ask questions. But the old technology is fascinating to Adeptus Mechanicus and to their belief no knowledge should be lost.

… yeah. So, remember the rant about abominable intelligence…? Yeah. So this is a very-very-VERY ancient robot.

Noone really knows why those *things* appear on the battlefield, and why they decide to help Adeptus Mechanicus’ forces. If there is an experienced Datasmith (another type of Mechanicus’ infantry), he can change their battle protocols to serve given purpose. After the battle they disappear, they march away into the unknown. And somehow Adeptus Mechanicus is not afraid of them and THIS intelligence is not evil and bad. I dunno. Just AdMech things.

I owe You all better pictures of all of those minatures I’ve shown You today. I’ll write a little more about applying drybrush in different ways, about adding multiple limbs on magnets, about painting little-little details like eyes. Be prepared for high(er) definition and more detalis. See you soon!